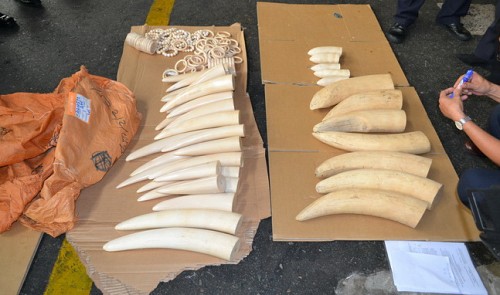 The United Nations said it is beaming searchight on wildlife trafficking in Nigeria, following recent seizure of more than $8 million worth of elephant tusks and pangolin scales by Hong Kong customs from a shipping container coming from Nigeria, making it the biggest catch of its kind, by value and weight and ever in the city. Over the past twelve months, a total of 25 tons of ivory and pangolin scales were seized in Asia, which allegedly originated from Nigeria, while 13 tons of its kinds were seized in Nigeria.

United Nations Office on Drugs and Crimes (UNODC), which revealed this during activities to mark the 2019 World Wildlife Day in Abuja, noted that similar incident in October 2018 led Vietnamese authorities to intercept more than eight metric tons of pangolin scales and ivory arriving from Nigeria.

According to a statement by Mr. Sylvester Atere, Outreach and Communications Officer, UNODC, pangolins smuggled to Asia are unlikely to originate from Nigeria as the species is near extinction in the country. “It appears that Nigeria might risk to evolve rapidly into a transit hub for illicit wildlife products, including pangolins, elephant tusks and other protected species, destined for countries in Asia as well as Europe, the Middle East and North and South America. “This marks a sharp increase from the almost eight tons of pangolin scales seized by States parties to the Convention on International Trade in Endangered Species of Wild Fauna and Flora (CITES) in 2016 and 2017”, it added.

Over the past twelve months, a total of 25 tons of ivory and pangolin scales were seized in Asia which allegedly originated from Nigeria, while 13 tons of pangolin scales were seized in Nigeria. Meanwhile, the Nigeria Customs Service has renewed commitment towards tackling illegal wildlife trade estimated to worth over $150 billion per year. The illegal wildlife trade which is largely driven by high demand from Asia and elsewhere is the 4th largest illegal trade in the world (after drugs, weapons & human trafficking resulting in catastrophic declines of various wildlife species across Africa such as elephants and pangolins scales.

At a workshop organized for the Nigeria Customs Service, the National Contact Point for the World Customs Organization, Regional Intelligence Liaison Office for West Africa, Abimbola Animashawun said that Nigeria has attracted international criticism and sanctions as an important transit country for the illegal wildlife trade from Central Africa to China and Vietnam. Animashawun stressed that despite the number of arrests and seizures made by Customs, prosecution has been weak.

Also the Country Director, Nigeria Programme of Wildlife Conservation Society (WCS), Mr. Andrew Dunn said, “the elephant population across Nigeria and the rest of Africa has declined by 90 per cent in the last century due to hunting for ivory. “Due to its porous borders, Nigeria has become an important transit country for the ivory trade from central Africa to China and Vietnam. There has been some huge seizures of ivory recently, illegally shipped from Nigeria. This includes 3.5 tons of ivory from Nigeria seized in Singapore in March 2018, with a value of N900 million”, he noted.